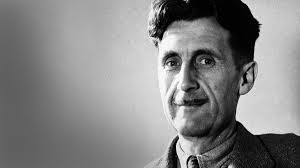 For whatever reason, 1984 was not part of my high school curriculum. But now, all these years later, I've read it, and I have to say: it's pretty much as I imagined.

Don't get me wrong, I have a lot of admiration for Orwell, and his essays, especially, are that rare mixture of prescience and insight. 1984, of course, reveals something similar: namely, a balance between perception and anticipation.

I suppose, though, given the ubiquity of the novel, that I found parts of 1984 somewhat predictable: there's the state in opposition to the individual, who is ultimately betrayed by elements of the state; then there's criticism of Communism and Stalinism, and a hope, expressed through Winston Smith, for a humane form of socialism. All of this is fair enough: the critique is certainly well founded. But there wasn't much here that truly moved me.

What I did find compelling, however, were Orwell's meditations on language and what he expected might happen to it over time, as politics became more binary, more extreme. I hesitate to raise topics which are overly political on the blog, but it's my sense that we saw a reduction of language under the second Bush president, and that we're seeing an acceleration of it today under Trump. In fact, it's scary: the simplicity, the juvenile nature of the language used by Trump to articulate political objectives -- and to identify political enemies -- is no far from what Orwell imagined with Newspeak.

Again, my goal here is not to comment on contemporary politics but instead to highlight Orwell's sensitivity to language, and to his concern -- which is one I share -- about its deliberate reduction, its calculated simplification. Orwell was clearly alarmed by this potential -- and for good reason.

In the end, I am pleased to have finally read 1984, and there are parts of it which I'll take with me. But dystopian literature has never been my interest, really, and in these strange and disconcerting times, I am perhaps less inclined than ever to engage works which serve as a mirror to the current condition. For the moment, at least, I'm it's all about Down and Out.

Posted by Jesse Freedman at 7:42 PM