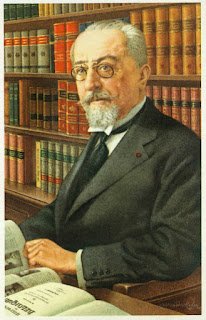 I took a break recently from fiction to read Henri Pirenne's famous analysis of the medieval city - and let me say: what a fascinating interpretation of events.

Pirenne begins with the collapse of European trade around 700, attributing it to the emergence of Islam around the Mediterranean basin. This collapse is followed by nearly 300 years of economic contraction: indeed, it's as if all that's left in the wake of Rome is a land-holding elite and a distributed network of ecclesiastical officials. Slowly, though, the scene changes: fortresses, intended originally as protective zones, are surrounded by what effectively amount to trade "burgs." These, in turn, are populated first with merchants, and later with a middle class. Municipal institutions emerge - as do laws intended to protect the middle class and its interests. Finally, currency takes shape, as wealth is divorced from land and hereditary grants.

My summary here is a simplification, of course. What's important, I think, is that which Pirenne has left us: an accessible, convincing account of Europe's plunge into darkness and stagnation, and its subsequent rebirth around 1000. Ultimately, Pirenne's analysis offers a framework for understanding urban growth in other parts of the world, and reminds us just how important the middle class was then - and continues to be today. It is, if nothing else, an incubator of change and innovation.
Posted by Jesse Freedman at 8:33 PM