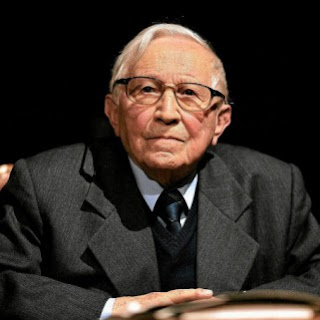 It's not often that I sit down to read a collection of poetry, but after having found the clipping I'd saved from Tadeusz Różewicz's obituary in the New York Times, I ordered a volume of his collected poems, published in the States as Sobbing Superpower.

I'm no expert on poetry, nor am I its greatest champion. That said, there was something about Różewicz's work that resonated, that I found both approachable and lasting. And more: I found his poetry without pretense, without that aggravating opacity I so often encounter in contemporary poetry.

For me, the most memorable aspects of Różewicz's volume include:
The last word is for Różewicz:

"No one remembers anymore //
The weight of a human tear"