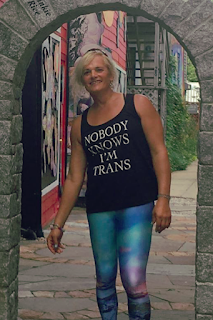 Frank posted on “transgenderism” which isn’t even a word.  The rest of the article was filled with similar stupidity, including a lack of any understanding of the science as well as uninformed speculation.  (For example, yes I knew I was trans when I was very young.)

To make it very clear there isn't anything substantive and real in the article, rather it is about one man’s opinion who doesn’t like people like me.  That makes it transphobic and hostile.  Same thing as an uninformed article about people who are different religions, colors, sexual orientations, etc. etc.

I deal with this all the time in life and work, pure prejudice based on ignorance.  I’m not dealing with it now here in Books Inq. where I was an invited blogger.

Crap.  I just wanted/needed one place.  This one came from nowhere and it hurt.

Take care all and good bye.
Posted by Unknown at 5:47 AM