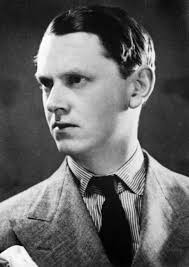 I've written about Evelyn Waugh before, but it's time to sing his praises again -- because I've just finished his first novel, Decline and Fall.

To note at the start: Waugh was a natural talent, and it's hard for me to believe that his approach to narration, especially, could be so well evolved so early in his career.

In Decline and Fall we see not just hints of Waugh's signature dialogues; instead, we see it front and center, propelling the novel forward. And more: we get a sense for Waugh's conceptions both of plot and comedy.

Regarding the former: Decline and Fall is a book defined less by what happens and more by how events assume a comic shape. There's an absurdity to Paul Pennyfeather's story -- and no doubt, parts of it veer off into the ridiculous. But before that, Waugh leaves his imprint, exposing the inane, poking fun at the academy.

Like Lucky Jim (which came a generation later), Decline and Fall is a book to be enjoyed: true, there's social commentary here; and true, there's an autobiographical quality as well. But to focus too heavily on these aspects of the novel is, I think, to miss its magic. Waugh's contribution is the perfectly time joke, the innuendo left unsaid, the character with a name too good to be true.

Decline and Fall was the start of it all, and while it doesn't entirely hold together, it signaled the emergence of a significant new talent, one with a sense of humor -- and sense for how humor could be used to enhance a writer's literary pursuits.