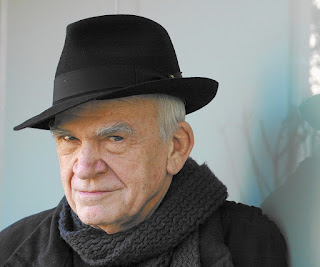 I in the middle of Edgar Allan Poe -- and I have to say, it's getting a bit heavy. So I've taken recourse to an old favorite: Milan Kundera.

At this point, I've read most of Kundera's work, but his most recent novel -- The Festival of Insignificance -- is not one I'd had a chance to enjoy. That is, until this week.

As always with Kundera, I was not disappointed. Festival is a fast, easy read, and while it's not as complex, perhaps, as the novels before it, there's a glimmer of magic here, certainly.

Two themes emerge: absurdity and individuality. These are topics, of course, that Kundera has explored in the past, but here, they're crystalized: as if the characters, finally, are meant as nothing more than vehicles to expound philosophical concepts.

And when it comes with Kundera, that doesn't bother me. Reading Kundera has never, really, been about his characters: it's been, instead, about understanding how their actions represent larger ideas. The same holds true in Festival: characters laugh not because it makes them whole or three dimensional, but because the thing that makes them laugh is worthy of evaluation.

The Festival of Insignificance is meant to be read in an afternoon: it's a reminder of the absurdity of it all; of the role of humor amidst sorrow; and of the process by which ideas transform into action. This isn't Kundera at his heights necessarily, but it's a reminder of the style and concepts that made him famous.
Posted by Jesse Freedman at 10:49 PM