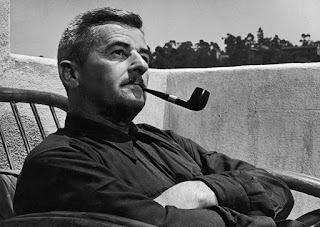 I can't claim to enjoy the novels of William Faulkner. And having now finished Light in August, the feeling remains: Faulkner's novels are a lift; they're tough and challenging, and require sustained intellectual engagement.
Of course novels which demand these things are not to always be criticized, but Faulkner seems to me to be in a different league. Light is a dark, complex novel: one with a compelling plot, and with fully formed characters. The challenge is Faulkner's rhetoric: it overwhelms, it overflows, and it contradicts. Light is full of passages in which something is X, but also not X, someone is Y, but also not Y. It's as if Faulkner knew his characters so well that he could not accurately describe them: he was simply too close.
And more: Faulkner's narrative seems at times to deliberately confuse. Characters have the same or similar names, and their interior monologues are so often intertwined that it becomes a challenge to understood where those monologues end and where the dialogue itself begins. (To wit: primary characters include Bunch, Brown, Burch, Bobbie, and Burden.)
No doubt, Light is propelled by a frightening plot: one which which succeeds, remarkably, in coming full circle, in tying together its tangents. But the road toward resolution is a challenging one. Faulkner's characters act, but that action is obfuscated by cascades of thought and revelation. Had Robert Penn Warren, for instance, written Light in August, well, that would have been an entirely different, and more rewarding, experience. But he didn't, and the result is something tall and astonishing which is not all together coherent.
Posted by Jesse Freedman at 6:07 PM