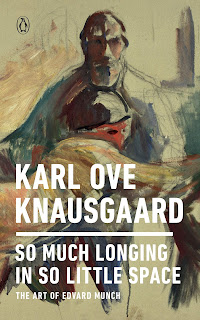 Despite some of the reviews, I enjoyed Karl Ove Knausgaard's seasonal quartet. I found the writing light, but insightful. When his most recent collection was published -- this time on the art of the Norwegian painter Edvard Munch -- I was again happy to oblige. And I'm glad I did: So Much Longing in So Little Space is an excellent introduction to the life and work of this famed artist.
Instead of summarizing Knausgaard's approach to Munch -- including his tendency toward iconography and reduction -- I wanted to focus instead on the essays, and why, taken together, they make for such a readable work of criticism.
Knausgaard may have a healthy sense of self-regard (and his self-deprecation may sometimes feel contrived), but that does not mean that his writing and arguments suffer. In fact, it is often the opposite: in his attempts to maintain an element of intellectual modesty, Knausgaard proceeds with caution, and a decided lack of jargon. Which is not to say that his theses are pedestrian or ill-informed. Rather, they are accessible: they do not obfuscate; they do not hide behind theory.
Knausgaard presents a measured version of Munch: part biography, part artistry. The result is a layered, but always tempered, impression of this titan of European art. Knausgaard does not kneel before Munch, but he does see him and his work anew. This is a work of criticism which moves beyond The Scream and into the lesser pieces, the sections of Munch's oeuvre which reveal as much or more about his departure from convention.
For an approachable read on an important artistic figure, I enthusiastically recommend Knausgaard's collection.
Posted by Jesse Freedman at 4:11 PM