"Fantastic Variations on a Knightly Theme" ... 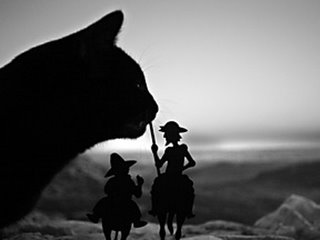 That's the subtitle of Richard Strauss's tone poem Don Quixote. It has obvious bearing on what I'm about to link to.
This year is the 400th anniversary of the publication of Don Quixote. My colleague Eric Mencher and I proposed to The Inquirer that he and I go to Spain and follow the rueful Don's wanderings, in much the same way as, the year before, we had strolled in Dublin where Leopold Bloom wanders in Ulysses (the Rosenbach Library and Museum in Philadelphia, which has the manuscript of Ulysses, also has the best first edition of Cervantes's great novel). For various reasons -- these are tight times for newspapers -- the proposal never took off. But Eric and his wife Kass just spent the past few weeks in Spain, and Don Quixote was eveidently still on Eric's mind. One of his ideas was to take this Don Quixote figure he had bought at the Reading Terminal Market and use it as a stand-in for the actual Don. The photo shown is an example of what you would have seen had our proposal been accepted. You can see more HERE.
Posted by Frank Wilson at 11:38 AM