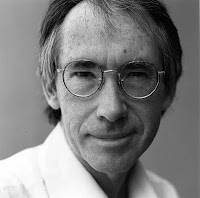 Let me begin with an apology: Ian McEwan, you're a master, and for anything I've said about your novels in the past, well, I'm sorry.


Because here's the reality of it: Atonement is an incredible book. I can't remember the last time I plowed through a novel as quickly as this one.


Short reflections on the book:


1. Briony's return to her home recalled - for me, at least - the conclusion of Brideshead. I hadn't thought much about Waugh while reading Atonement, but that idea of return, of revisiting, invoked the final pages of Charles Ryder's journey. (It also invoked parts of Howards End as well).


2. Ian McEwan shares something with Updike, I think: his sentences are luciuous, precious. But whereas Updike steps back and admires his work (often for too long), McEwan uses it to weave an emotional tapestry, a narrative that strikes a near-perfect degree of balance, composure. In this sense, McEwan reminds me of Banville, who achieves something similar in The Sea.


3. The second section of this novel - which captures the retreat to, and then from, Dunkirk - is as good as it gets. But then, so is the first part of the book, which establishes that original crime, that tale for which Briony later seeks atonement.


I know I'm a little late to Atonement, but every generation comes to The Greats at its own speed, in its own way, and now that I've finished McEwan's masterpiece (yes, I am willing to use that word), I have the sense that I've gained more than I know.
Posted by Jesse Freedman at 10:17 AM