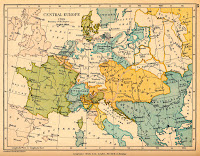 As a history teacher, I’ve always found it interesting to discuss with high schoolers the complicated idea of ‘causation’ (that is, what caused, what contributed to, past events).

What’s striking about conversations involving this topic is the extent to which students are willing (often through no fault of their own) to attribute events to ideologies - as if Nazism itself were responsible for the Holocaust.

Regarding Nazism (and Fascism, too), I stress that, without Nazis, Nazism (as an ideology) would have been unable to do, well, to do anything.

This, I think, is key: that students confront the idea that systems of belief are not, in and of themselves, capable of destruction. Ideology becomes dangerous - in a historical sense - when individuals activate their core tenets.

At the high school level, conversations involving causation can lead in other directions as well. Most rewarding, I think, are those which involve the idea of ‘attribution.’

Continuing for a moment with the example of the Second World War: students must address in their thinking the notion that Germany (with a capital ‘G’) was not in itself responsible for the Holocaust.

True, that country initiated the events which conspired against Europe's Jews, but again, a nation cannot act without individuals. To attribute to Germany (as many text books do) blame for the Holocaust seems, therefore, as irresponsible as attributing that same umbrella of blame to Nazism.

After discussions involving ideology and attribution, students, I find, are more effectively positioned to handle the crux of the issue involving causation - that is, that individuals, and individual action, trigger historical events. To get at the Holocaust, students need to wrestle with documents which reflect the mindset, the priorities, of the German people.

While it can be an awkward process for students - to say nothing of nations - to come to terms with who, exactly, ‘became’ a Nazi, or a Fascist, or a Collaborator (in France), these discussions are important - vital, even - in our ability to accurately recreate the past in American classrooms today.