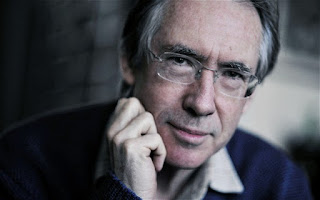 When it comes to Ian McEwan, I think it's time we be a bit more honest.

Let's start with the good: McEwan can write a pretty sentence -- and On Chesil Beach, the novel I've just finished, is filled with them. There they are, one after another, one more beautiful than the next.

But does McEwan have a style? How would you describe his writing? For me, this is the difficulty: Chesil Beach is loaded with delicate -- almost ethereal -- sentences. Some of them are even memorable. But as I say: what's his style? This isn't like reading David Lodge or Philip Roth. It's not even like reading Graham Swift. There's a beauty here, but it's not part of something larger.

Which is not to say that Chesil Beach is a failure: indeed, there are sections of the novel which are very well done. But to my mind, there's a guilty pleasure here, there's a sense in which the novel is a bit too easy: the reader doesn't have to work for satisfaction.

And more: Chesil Beach struck me as less a novel than a novella, less a finished work that one in need of a second act. Because it's right at the moment of tension, of conflict, that the book effectively ends. McEwan appends an epilogue of sorts which takes the central characters through forty years in ten pages -- but it's not effective. To my mind, the book needed a second half, one in which that conflict is explored further (and perhaps resolved).

All is not lost here: Chesil Beach does present an accurate rendering, I think, of the early 1960s, that moment just before it all came undone. These are characters born during the war, who came of age amidst the last of the Victorians. The sexual dynamics in the novel are especially strained, and I certainly believe McEwen was on to something in his treatment of what happened there, to that young couple, on Chesil Beach.

Ultimately, Chesil Beach held my attention: indeed, I finished it in three sittings. But I felt throughout that the narration and plot were held together by something artificial, even gimmicky. I'll be the first to concede that there's the kernel of a tragedy here; I just wish that sorrow had been packaged in more muscular prose, with an accompanying character arc that was allowed to fully develop.
Posted by Jesse Freedman at 3:35 PM